Captain Future is the alter ego of East London studio owner and producer Alex McGowan. Alex has produced The Urban Voodoo Machine, Jim Jones & The Righteous Mind amongst many others, collaborated with Jah Wobble, Tricky and more. As if he wasn’t busy enough Alex also founded and leads nine piece band The Future Shape Of Sound. Obviously things have been a little quiet lately so he’s had time to focus on solo projects and ideas that have been on the back burner, and now they are ready for release on the album Ghostman.

Unlike the raucous gospel of The Future Shape Of Sound this album is full of cool vibes for the late night after party chill party, trip hoppy with a blues undercurrent showcasing Alex’s musical talents, a producer who can really play, bringing together diverse styles and sounds, the whole greater than the sum of its parts. There are some neat production tricks like suddenly clipped echoes occasionally pricking your ears, reversed playback, instruments and sounds below the surface that rise up and draw you in, painting pictures in your mind.

The album opens with Holy Waters, the first single release from the album. It has a lazy easy rhythm with seductive charm. The breathy growly and higher register vocals are contrasted by smooth spacious melodies. Sounds that are by turns both liberating and mysterious. It’s like a door opening, being beckoned in to somewhere maybe you shouldn’t go. It’s followed up by second single Zombie Lover, swaying tribal percussion with almost slow ska piano, an afterlife love fantasy, wrong and seductive, good and evil.

As Soon As I C U clip clops along with a chopping acoustic guitar which fades as the song progresses and Nuwella Love’s longing vocals come to the fore, some jazzy back in the mix trumpet sounds adding the smoky atmosphere. Actually mouth trumpet is more accurate, Earl Okin makes the sounds with his mouth, not playing an actual instrument. The tempo steps up for Oh People although still chilled and cool, funky guitar driving the song. A sorrowful lament to us all about the rise of corrupt and power chasing politicians.

The Captain’s far away vocals mixed with feathery responses from Bearte that suggestively tickle your ears make going for a beer sound so tantalizing on Rowing To The Pub, so far away yet so close. The closing phrasing of ‘lets go to the pub’ is like a meditation mantra, hang on it won’t be long now. Following on the theme, Move On sounds like a boozy sombre New Orleans funeral procession with distorted harmonica provided by Son Of Dave. Driven by a deep pulsating drive, the lyrics tell of a relationship ending, leaving the past behind but not forgetting it.

Wrong And You Like It lifts the mood with bluesy slide guitar. Suggestive lyrics as the title signposts, all pent up irresistible desire and need, simple and really effective. Jogging along on jungle beat rock n’ roll toms Ghost Woman builds up with ghostly wails, fifties guitar licks and simple drums, the kind of song you’d expect to hear blasting out at a late night carnival fairground to an audience of Rockers.

Things slow down with instrumental Space Age Gangster Funeral, a spooky 50’s horror thriller soundtrack, or an interlude, a reset. A big brass refrain repeats adding drama over the soft percussion and eerie keyboards, a touch of the Murky World of Barry Adamson about it. I Liked You When You Were Gone closes the album. A take on the saying absence makes the heart grow fonder with a twist, the lightest and most commercial sounding track on the album.

Alex plays most of the instruments on Ghostman but has called on a number of collaborators who have worked at his Space Eko East Studios to contribute to the album. Influence is a two way street, you can hear Alex’s talents in his client’s recordings, similarly there are echoes of his clients throughout the album. As well as those mentioned above there are appearances by Chezelle Wilson-Williams, Maff Scott and Tina Ngondo.

To me the album sounds like a soundtrack to a hazy walk through a late night party, catching snatches of conversations, some outrageous, some mundane, reminiscent of 60s films attempts at displaying happenings. Emotional themes twist and turn and contrast through the album, lust, love, loss, good versus evil, injustice. I hope there are more ideas brewing in the Captain’s East London studio and he makes time to work on them.

The single Holy Waters was released on January15th, Zombie Lover release date TBC, the album Ghostman is due for release in April. In the meantime promos and more can be found at: 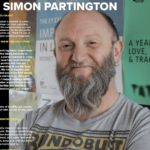 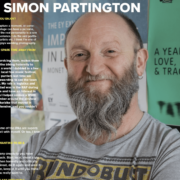