Ewan Macfarlane for those not in the know is music royalty in the deepest depths of industrial Lanarkshire, originally from Stonehouse he honed his musical talent in a number of bands, heck he was even in a band with me way back in the heady days of the late 80’s early 90’s!!! but we’ll not go there. Relocating to London was a huge move as he threw off the musical shackles of Central Scotland and flourished into the musician we see today…..His proudest moments were when he played with the biggest Scottish band never to really break through The Grim Northern Social– ‘Under Pressure’, ‘Honey’…. sadly a victim of what can be a parochial Scottish music scene…..such a waste. He also had stints in the international superstar Apollo 440 – ‘Stop The Rock’, ‘Aint Talking Bout Dub’ as their frontman/singer, way up there as his former bandmates looked on from afar.

COVID hit Ewan hard as it did us all but after catching the virus rather than sitting down to it, he channeled his creative juices and began to write a song a day through the lockdown, this resulted in an incredible album of songs – ‘Always Everlong’…the solo album he has always wanted to do.

Tonight, Ewan MacFarlane played an incredible intimate gig in The Georgian Hotel, Coatbridge, typical Ewan supporting local talent and promoters. Again, COVID strikes with the support and his band pulling out due to infection, ever the fighter Ewan goes ahead and plays an acoustic set which to be honest was brilliant and lost nothing with the COVID absentees. With a set of songs from his very distant past, distant past, not so distant past, present, and future and the odd anecdote thrown in for good measure, his body of material is brilliant.

The new mature Ewan MacFarlane is an impressive beast indeed dedicating ‘Something Beautiful’ to his wife and kids… a man truly in love. ‘Stirrin In The City’ from the new album tells of his emergence from lockdown on a trip to Glasgow’s West End.

A 90 min set mostly with a mix of songs from Grim Northern Social and songs from his magnificent new album ‘Always Everlong’ entertains the near-capacity audience.

A truly wonderful gig and well-deserving of a 10/10

Ewan with his band now plans to get back in the saddle playing gigs and releasing more material, you can catch him at ‘The Glad Café’ Glasgow on the 25th of March, and if you can’t wait till then check out his new album ’Always Everlong’.

She Comes For The Kill

Stirrin in The City 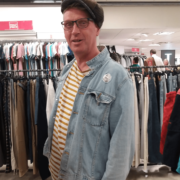