NY,NY – Halloween night! My favorite time of the year, and what a place to be New York City, the best city to spend Halloween in. The energy is amazing, the city is crawling with all sorts of ghouls and goblins, the kids are out trick or treating, adults in costumes heading to parties, but for some, a different type of fun was in store. A type of fun unlike any other. For 1,200 blood-thirsty fans headed to Irving Plaza it was to come to celebrate GWAR’s 30th Anniversary of their ‘Scumdogs of the Universe’ album. The anniversary tour featured Napalm Death and Eye Hate God with a sold-out show at the 3rd annual Gwaroween.

This would be my first night back to Irving Plaza since they closed down for renovations pre Covid so I was looking forward to seeing just how it looked inside after seeing photos they posted online after all the renovations were done. With everything in life, it’s just not that simple. I arrived at the venue just as the doors were opening and of course, the line was down to the corner, no big deal right doors just opened? Wrong! The line stretched to the corner, around the corner, and down the entire next block and with the new Covid safety protocols entry was slower then what we once knew. As the line seemed to move at the same time it continued to grow in size continuing its stretch around the corner and down the next block. This did allow time for me to chat it up with friends I would run into and soak up everyone’s costumes. One thing about a GWAR show is you can always spot those who are planning to be right up in the front. They wear as much white as possible. Seeing as it was Halloween some fans were wearing full white zip suits. The downside to the lengthy line was that meant the clock ticking away. Originally I approached a security guard at the line about press entry and was directed to the end of the line, after some time went and not seeing this guard at line I finally approached one I was familiar with and was able to get in ahead of all the traffic. Unfortunately, Eye Hate God was down to their last three songs of their set. Much like myself who pretty much missed all of Eye Hate God there would be a lot of fans who would miss their entire set and maybe even some of Napalm Death. On one more quicksilver lining too seeing a line of that size, it was something that I hadn’t seen in a long time. I’m so used to getting to the smaller venues and the lines being real short do to fans not really showing up for the opening acts. It was a great sight to see this enthusiasm from fans.

Once inside the energy level was felt, fans were fueled up and ready for a crushing night that I could tell started as soon as Eye Hate God hit the stage. Napalm Death hit the stage and a roar erupted as vocalist Mark “Barney” Greenway began his signature circling on stage as the band readied themselves before bursting into their set. The last time Napalm Death played New York in 2019 they were on tour with Virginia thrashers Municipal Waste and New York Hardcore legends Sick of it All and without long-time bassist Shane Embury so it was great to see the entire lineup for this show. With the pit opening up immediately upon the first note the English grindcore legends began pounding out a blistering set as they always do, with only little talk when necessary, Greenway would thrash about on stage from side to side with Embury and guitarist John Cooke taking care of business from their rightful sides on stage while Danny Herrera effortlessly as always pounded down on the skins for always impressive energy fueled set. Finalizing their head pounding set Napalm Death ended things with a most time-appropriate song, a cover of the Dead Kennedys “Nazi Punks Fuck Off.” As the song was introduced the sold-out crowd went crazy as they roared bang their heads and went wild in the pit, singing along to the chorus fist held high in the air for the quick minute that it lasted.

The time had come for all the maggots in attendance who had eagerly been waiting for the bloody onslaught the Scumdogs of the Universe would unleash on the East Village. The 30th-anniversary tour brought out a group of old familiar faces, like longtime arch nemesis of GWAR Techno Destructo who was the first to make his way out on stage in a stalking manner to only hold the decapitated head of deceased vocalist Oderus Urungus who unfortunately passed nearly a decade ago. Bragging that he ripped his head off with one quick snip of his giant robo clamp arm just that night as he snuck up behind him while Oderus was taking a piss. While Destructo awed in his glory a Bohab (an extreme GWAR fan) frantically ran out on stage crying that his friend was killed while in the bathroom taking a piss. Oh yeah by the way, his friend, was wearing an Oderus costume. I guess intergalactic news travels a bit slow, and just like that the slaughter began. With one swift swing of the axe the frantic Bohab was decapitated and the bloodshot out onto the thirsty fans as the riffs of “The Salaminizer” thrashed through the ears of 1,200 hungry fans. The pit opened up in a frenzied spiral as bloody bodies came crashing over the barriers while vocalist Blothar manned the vicious onslaught. One thing that stood out the most was the absence of bassist Beefcake the Mighty? Anyway, blood-wrenched Bohabs poured their icy cold hearts out and let their feelings be known as they sang along in unison to “Sick of You.” With just about every song there was a great comical skit to go along with even one ushering our new president Joe Biden. GWAR seemed to pull out all the stops for this show, way more blood and guts than the last I remember. Blothar was his normal raunchy self as he took time out to milk his utters and shoot his spooge all over the crowd in front and high into the balcony overlooking the stage. As “Maggots” began to fall like rain the already frenzied pit became a possessed group circling fist-bumping screaming to the chorus “Maggots” while it seemed those outside the pit filled in the rest “falling like rain.” Now I know the whole crowd was actually both parts but that’s how much the pit stood out. With all the goodies in our bag of treats I was bummed that we didn’t get any “Sexecutuiner” that night, but GWAR is switching up their set from stop to stop. The Bohab’s did however have a terrible night with a rotten set, and for those who don’t know to GWAR anything bad is good, and with that information being known GWAR ended their set with a very GWAR appropriate encore “Fuck This Place” and just like that the blood had been shed and the slaughter was over for now. The blood soaked Bohab’s would pour out onto the streets of the East Village with hunger satisfied for the time being until GWAR returns for another bloody slaughter. 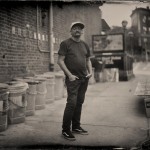 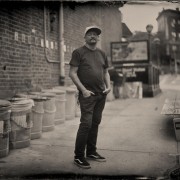