It’s the Scottish Gold Cup weekend and Ayr Racecourse is hosting the event on a warm, sunny Saturday afternoon. Yet, it’s the dark hall tucked away in 38A Carrick Street, with its full band stage set up, shiny polished dance floor and glittering disco balls, where Ayr’s music lovers really want to be.

Live music is back at Scotland’s newest music venue- Venue38. The venue is fully charged with a brilliant live sound and performance set up. And with a polished wooden dance floor on offer for the potentially 800-capacity crowd to enjoy, Venue 38 will no doubt quickly establish itself as one of the best music venues in the West.

The opening celebration showcased the venue’s dedication to promoting both up and coming and established acts. Music fans were treated to an all-day array of musical genres from acoustic indie to rockabilly, rock and grunge.

Long Day Living’s Kenny Thom and Stephen McLean kicked off the event with their brilliant 90s alt-rock inspired acoustic set. Next on was singer-songwriter, Kevin McGinn who, with impressively strong vocals, belted out a mix of covers and original music. Kevin’s last track ‘Won’t Remember You’ was wonderfully intense. Quick changeover later, Craig Smith of Ayrshire band The Schemes, wowed the crowd with acoustic indie-rock tracks.

It was then the turn of Ayrshire legend Rikki McKay. Performing original and cover bands for what is probably the best of 20 years already, Rikki knows how to deliver a set. This time, Rikki played all his own acoustic tunes and, hearing influences from Artic Monkeys, White Stripes and The Beatles, I was reminded what a great songwriter he really is.

Host Gav McMulkin accompanied the most fabulous singer Claire Gibson to play a cover set including Prince’s Purple Rain. Wow. What a voice. Claire’s voice- smooth as velvet and powerful- left the audience speechless. Gav’s skillful guitar playing was in perfect harmony with Claire’s performance; this duo were flawlessly in tune with each other.

From the very first strum, Daniel Muñoz, came out strong and let us know that he knew how to play. And then came Adam Scott, a firecracker of a musician. With a great big smile on his face, Adam plays like he is genuinely having the time of his life. Adam’s youthful energy is infectious- he is a force; this young musician is one to watch.

Next up was, in my opinion, one of the highlights of the event. Scott Gilbert, of Dunfermline band Toastie, is ripping with confidence. Anyone who opens with a cover of The Waterboy’s Fisherman’s Blues, has me straight away. Scott’s voice has a likeness to Jake Bugg but his stage presence and sound has the fullness and energy of the likes of The Levellers. He plays knowing he has people watching; he knows that he putting on a show- keeping his audience entertained and happy.

Elmugid Presents : Toastie : If you believe.

The Barely Responsible, from Irvine and Glasgow, are three lads who really know how to make noise. Front-man Blair Gilmour, who had success last year on the BBC vocal competition The Voice Kids, Kyle McFie on bass and Sam Craig on drums, are a magnificent young band who played an amazing set. The Barely Responsible smashed it and more than held their own, sharing a stage with some bands that have been gigging since before they were born! This band are the future of indie-rock.

Glasgow based band The Lost Dogs upped the angst with their mixture of grunge and rock music. They had the crowd rocking to hits from Pearl Jam and Rage Against the Machine.

The Peas– the original blackeyed Ayrshire 50s rockabilly band- delivered the results as they have time after time again! The urge to dance was far too strong; The Peas are a superb band who always please the crowd.

From grunge and rockabilly, the night took a turn in genre with Campbell Sproat, Baz Fisher, Pav Cathcart and Jordan McKee who have formed a new band – Black Tsar– to create a distinctive alt-rock sound. Reminding me of the likes of Black Rebel Motorcycle Club, Black Tsar ripped it. 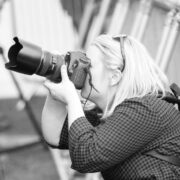