It had been 443 days (February 2, 2020) since I last covered a live show and COVID 19 pandemic restrictions were implemented all over the world. The Samantha Fish show had a crowd of approximately 200 fans in attendance (30 percent capacity). They had their temperature checked at the door, sat in small groups spaced six feet apart and everyone was wearing a mask.

If you have never had the opportunity before to see Samantha Fish, please let me take this time to describe her to you. She looks like a gorgeous, long legged, blonde bombshell from the 1940’s. Wearing a gold sparkle leather jacket and dressed in black, she strutted around the stage in four inch gold platform heels, as if she were skating on ice. Her voice was so sweet sounding, it could make you cry. And her guitar playing acumen……… Unbelievable!!

It was the second night of a two night stint at The Beacon Theater in Hopewell, VA. for Samantha Fish as she demonstrated why she is one of the preeminent First Ladies of the Blues Guitar with a musical exhibition second to none. I have seen some incredible performances by some of the greatest guitarist all time – Eddie Van Halen, Chet Atkins, Bonnie Raitt, Brian Setzer, Eric Clapton, Angus Young, Stanley Jordan, Billy Gibbons, Albert King, Steve Via, Jimmy Paige, Paul Gilbert, Pat Metheny, BB King, Rory Gallagher, Jeff Healy, Gary Moore, Albert Lee, Steve Cropper and many more over the last 40 plus years of shooting concerts, and tonight’s performance by Samantha Fish will go down as one of those unbelievable moments in time.

As the lights went down, Fish and her band, Ron Johnson on bass and Karl Boudreaux on drums, were welcomed to the stage by a rousing round of cheers and applause as they kicked off the evening with “Bitch On The Run” followed by “Chills and Fever” (Johnny Love cover), “Blame It On The Moon”, “Road Runner”, “Kill or Be Kind”, “Wild Heart”, “Blood In The Water”, “Gone For Good” and “You Can’t Go” (Lonnie Lester cover).

Fish then exited the stage for a short break as Johnson and Boudreaux put on display their musical prowess for the crowd. Fish returned to the stage for an solo acoustic set performing “Love Letters”, “Daughters” and “Jim Lee Blues Part 1” (Charlie Patton cover). While tuning her guitar, she asked the audience “What do you want hear?”  Many of them yelled back different Fish song titles, but a loud booming female voice could be heard saying, “What ever you want!”  Fish replied, “Thank You!” and proceeded with her acoustic serenade.

The band rejoined Fish and jammed out “Black Wind Howlin” and “Either Way I Lose” a (Teri Thornton cover). Now this is where things became very interesting and the evening was about to kick into high gear. Fish brought out a Cigar Box guitar and placed a brass slide on her finger and……..Oh My LORD!! I was hearing some of the finest slide guitar being played in my life! It was electrifying! I was in absolute awe as they played “Miles To Go”, “Bulletproof” and ended the evening with an encore of the Bukka White cover “Shake ‘Em On Down”. It was like an exploding volcano of music, showering down energy and excitement all over the hall as the audience was out of their seats dancing and cheering for more. A lifetime experience I will never forget. Samantha Fish, YOU ROCK GIRL!! 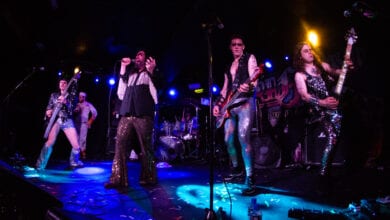 Tragedy: All Metal Tribute to the Bee Gees and Beyond

The Cinelli Brothers excite their fans at The Harlington – Concert Review