Boca Raton, Florida, USA – Not even the looming threat of a tropical storm kept fans away from the Mason Pace Band’s EP release party for ‘King of Hearts‘ at Crazy Uncle Mike’s in Boca Raton, Fl. on August 13, 2021. Surrounded by fans, family and friends alike, Pace and the band showcased their latest music.

The evening was on its way when three very young ladies of Beautiful Disaster took to the stage. The more appropriate description would be three young girls. The band is made up of 15 year old twins, Morgan Gieder (lead guitar and vocals), Reese Gieder (drums) and Natalie Miller (bass). But don’t let their age fool you. Beautiful Disaster can rock. They are a great warm up band for the evening’s headliner. Beautiful Disaster’s set includes great covers, new and old. It included song’s from Talking Heads, Blondie, Green Day, Joan Jett, No Doubt and others. This band packs a lot of energy!

The Mason Pace Band is Mason Pace (lead guitars and vocals), Cam Martell (bass), Alex Abbasi (drums) and  Kayla Frey (backup vocals). Pace has been a musician and performing for some time now. In 2017 and 2018, the Mason Pace Band played alongside of of the 80’s biggest rock bands including Cheap Trick, Vince Neil, Night Ranger, Joan Jett, Lita Ford, Great White, Foghat, Little River Band, 38 Special, Steelheart, Winger, Sebastian Bach, and Dokken, just to name a few. It is clear that they have taken the experience and stepped it up a notch with their current EP release. ‘King of Hearts’, the band’s sophomore release, is the follow up to their 2018 EP release, ‘Whateverland’. There are currently two videos out for the EP, the title track, “King of Hearts” and the second release from the EP, “Reborn”.

Pace and the band took the stage just a bit after 9 pm and hit the ground running playing the ‘King of Heart’ EP in it’s entirety along with some songs from ‘Whateverland’. They also entertained the crowd with a set of fan favorite covers that included Rush’s “YYZ” and a piercing version of “Evenflow” by Pearl Jam on which Pace expertly crafted the guitar solo.

With the release of ‘King Of Hearts’, the Mason Pace Band will be touring the state of Florida and playing six additional shows. If you find yourself somewhere near one of the venues, do yourself a favor and support local music by purchasing a ticket to the show. You will not be disappointed. 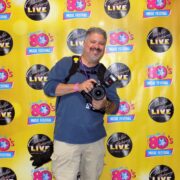