The Wandering Hearts played Nell’s in London’s Kensington, a little over 14 months after it was originally scheduled.  They were booked for 16 April 2020 as part of their UK Acoustic tour but, of course – like many, many other gigs worldwide – this didn’t happen.  This meant the band – and crowd alike – were more than ready for this date.  Of course, when the tour was booked they hadn’t released their latest, eponymous, album.  Supporting the band on this date were Roseanne Reid, a Scottish singer/songwriter; and Bobby Bazini, a French-Canadian singer/songwriter.

First up was Roseanne Reid. Accompanying herself with an acoustic guitar, Roseanne played an eight-song set, consisting of songs from her debut record, a new tune (slated to be on her second album), as well as a cover of Justin Townes Earle’s Ain’t Waiting.  Finishing her set with one of her best, I Love Her So, was definitely a winner.  Her unassuming manner and sweet voice kept the attention of those punters who arrived early to listen to the music and – judging by the queues after her set – won her a decent number of new fans.

Second was Bobby Bazini.  He was joined on stage by Odessa Page, providing backing vocals.  His seven-song set included his best-known, Blood’s Thicker Than Water (used in two episodes of US series Suits).  With a voice reminiscent of Paolo Nutini’s (without the Scottish lilt, of course), he entertained the audience, and received plenty of positive reaction.

The Wandering Hearts arrived on stage about 9:30pm to a warm reception from the crowd.  The band, along with an additional musician – who proved both extra guitar and double bass – started with three songs from their latest album Hammer Falls, Gold and I Feel It Too.  The album was only released three weeks prior, but those fans in the front few rows had already learnt the lyrics, so the audience participation was impressive throughout.

To the joy of the crowd, the next two songs were from the band’s 2017 debut.  The mixture of songs, moving the lead vocal duties, and the inclusion of Tess Whiffin on mandolin, made for a great set.  The set list mixed their old and new tunes well and created a great show.  All three members of the band were on form, the harmonies were beautiful, the playing on point, and it was a good advertisement for their May 25th ‘22 Shepherd’s Bush Empire gig, which is set to be their biggest headline London gig to date.

A mention must be made of Tess’ outfit.  A red pant-suit, with embroidery on the chest and on the lower, flared, legs, she looked like she had stepped out of a country gig in ‘70s Nashville.

Beautiful Days Festival is an excellent Festival, one to experience 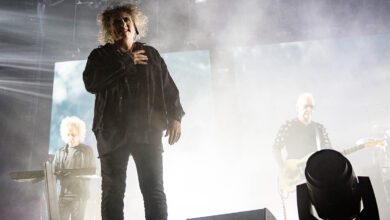