On a chilly December night, Hackney’s EartH hosted Jesca Hoop.  The American singer/songwriter, whose 6th/9th (depending on how you count the reinterpretation records) album Order Of Romance was released in July of this year, was nearing the end of her tour of the UK and Europe. In her usual sartorial fashion, there was more of a production than you come to expect from a venue of EartH’s size, with Jesca having had an ensemble made for herself and her band.

Support came from Chloe Foy. The Gloucestershire-born, London-based singer/songwriter started her set with an a capella version of Square Face, from her debut album – a sure-fire way to captivate the audience, with the simplicity of the arrangement combined with Chloe’s beautiful voice guaranteed to grab their attention.  The rest of her six-song set mixed new songs with two from her debut album, and an older fan favourite.  For anyone not familiar with Chloe Foy’s music, the fact that she has supported Jesca Hoop on many tours, and plays as part of her band, should give you an idea of how Jesca views her music.  She is definitely worth checking out.

Jesca Hoop took to the stage in a gorgeous outfit, which is unlikely to have been warm enough for the venue, with Chloe Foy and Kirana Peyton.  Playing mainly tracks from her latest release, Jesca interspersed the songs with information about the inspiration for each of them, providing those not over familiar with Hoop’s background with more information about her upbringing and belief system.  Although the one thing she said that really sticks in the mind is “Don’t ghost the Hoopster”.

It’s both strange and rather nice to go to a show where very little other than the new record is in the set.  The new songs were what you expect from Jesca Hoop, and – if you hadn’t heard the latest album – were a very good advertisement for the record.

Despite the coldness of the venue, Hoop was in fine form.  Her voice was as beautiful and strange – in a good way – as those of you who know her music would expect.  The lighting worked well with the music and the selection of vocal stylings, and the accompanying instruments were a joy to listen to.

It’s hard to describe Jesca’s music.  A mixture of Kate Bush, Tori Amos (minus the piano) and Bjork, with a whole lot of something else thrown in.  Her show was great to watch and listen to.  If any of this sounds appealing and you get the chance to catch either of the two rearranged shows in Edinburgh and Gateshead, you won’t regret it. 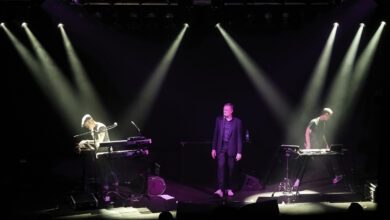