It’s always disappointing watching ’80s music documentaries with their focus on Kylie, Neighbours and Stock, Aitken and Waterman. The ’80s and ’90s were glorious times for progressive pop bands, whose musicianship and MTV presentation paved the way for long-haired, leather-wearing hard rockers. Two of their leading components, Go West and Cutting Crew, graced the stage with style at this iconic venue on a legendary evening.

This rescheduled tour saw Go West celebrate the 35th anniversary of their debut single We Close Our Eyes. This April 1985 release was accompanied by an innovative video directed by Godley & Creme, which became an MTV favourite. (I Just) Died in Your Arms, released just 15 months later, was the debut single from Cutting Crew that also proved to be a massive hit.

There were feelings of a post-pandemic relief at the Palladium, although, yes, the news is still not great. Lockdown one, a catastrophe for most, was for us a watershed. With a garden, nice weather and homeschooling, thoughts often turned over a bottle of wine in early to the Cutting Crew performance of (I Just) Died In Your Arms Tonight, live at Rockpalast in 2007.

This YouTube gem was a live twice-performed version of their first hit, showing their progressive pop in top form and was a very high benchmark for our expectations for the evening. That they chose to bookend tonight’s performance with this track was a genius move. The Palladium, with an orchestra, is an acoustic dream, and the strings teased the intro, without the band, which perfectly set the scene.

Nick Van Eede and Gareth Moulton joined, and Any Colour was an atmospheric opener with One For The Mockingbird, superbly following.

I’ve Been In Love Before, which gained the band a Grammy nomination and “has been played at every Cutting Crew gig”, was followed by Berlin In Winter. While the song is about a gig celebrating the fall of the bricks where no one turned up, this song was a certain highlight, Nick sending the song “one drive from Berlin” to Ukraine. “I stared at the Berlin Wall”, they sang and with the wonderful guitar and strings to finish, this was immense.

A beautiful set that was built with style, moved to the inevitable ‘..Arms’ finale. You would sense that original Crew guitarist Kevin MacMichael, who died in 2002, would have been looking on at tonight’s performance with a smile. Van Eede and Moulton have this relationship on stage, a partnership that was formed in 2005, of two guys loving their time and confident in each other’s skills.

When two people connect on stage in this way, neither grabbing the spotlight but sharing looks that show they are just having the time of their lives is something special to behold. Moulton milked the front of the stage as he should do, the crowd went wild, and Rockpalast was a distant memory.

Go West had a problem following that, but they coped in great style. Peter Cox looks great, sings great and commands the stage impressively. Birthday boy Richard Drummie is in top form, and again, you can sense the camaraderie, the mutual trust and friendship of two guys who have spent a lot of time together over the years.

The set starts on the super impressive Don’t Look Down and Eye To Eye, both from ’85. There is a playful mood with Cox and Drummie, and this is typified by the crowd singing happy birthday to the guitarist/keyboard player.

King Of Wishful Thinking and Baltimore To Paris show Cox and Drummie at their most stylish and coupled with an amazing solo from the lead violinist on the latter, these tracks are a drop of gold. The former song leaves the main crowd no longer with bum on seats, elevating a memorable night into something special.

Drummie, having the time of his life, introduces a song about having sex tonight, although he was “on his own”, before the band moved into Goodbye Girl. This is very well appreciated, with an amazing vocal that crosses the hall and shows how well balanced this whole evening is.

Futurenow, released in 2008, the pair’s first album since 1992, was well represented with Stars Don’t Shine, a fantastic song, and Faded, presented with emotive red lights. This was absorbing, with the red nicely highlighting a song about “one who you love who no longer loves you.”

Special mention should go to Ben Lochrie, a fantastic guitarist who held the progressive part of tonight together along with Phil G, Lyndon Connah and Vinzenz Benjamin. Let Love Come followed, introduced as a Futurenow song that the band thought would be a hit, and on tonight’s presentation, I would not disagree. That ending was prog-pop at its electric rocking best.

The stylish and most appropriate for tonight’s venue The King Is Dead follows, the walking bass line just the right piece for the right place. The trumpet solo and the whole arrangement in this atmosphere is just stunning. Then we are into the finish. The Tracks Of My Tears has the most beautiful arrangement, a stunning song presented with a most wonderful saxophone solo to finish.

Call Me follows, and the big guns are out. The white lights from the back of the stage light up the whole crowd, and you have to stand. Cox and Drummie thank everyone who has worked with them before We Close Our Eyes and King Of Wishful Thinking close the night.

Drummie has his phone out, and he and Cox just look replete. An amazing night. Waterman got an MBE and TV series about trains. Neighbours has been cancelled, eventually. Quite frankly, on tonight’s performance, who gives a shit about that ’80s dross.

Both Go West and Cutting Crew have proved that their legacy has lasted much longer. 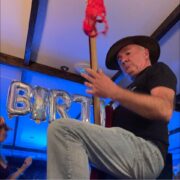